Every person who applies to become British Citizen must meet the mandatory ‘good character’ requirement.

What is the ‘good character’ requirement?

Good character is not defined in law. However, Home Office guidance does provide details of what will likely be considered ‘bad’ character.

What is considered to be ‘bad character’?

The current Home Office guidance offers a non-exhaustive list of what they deem ‘bad character.’

The below diagram summarises what will be considered and how likely each consideration is to lead to a refusal.  Each point is then discussed in turn. 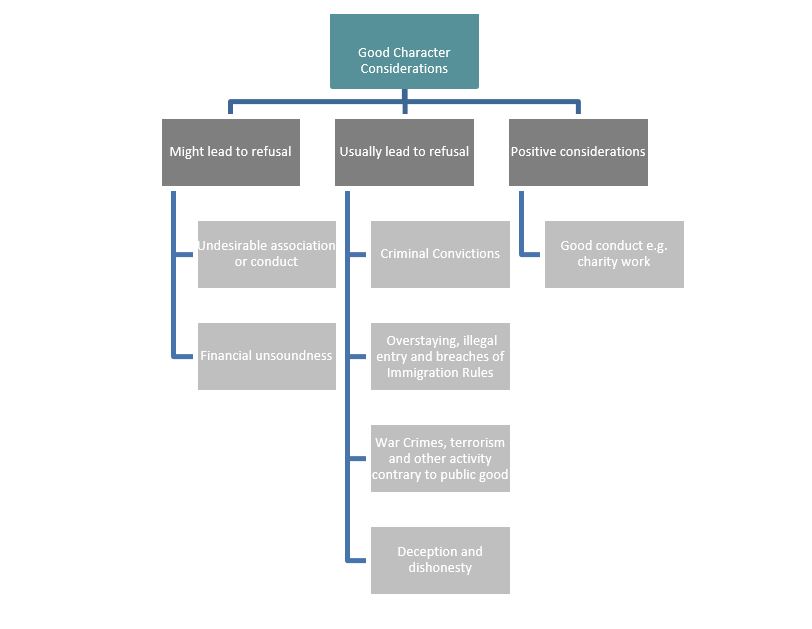 An applicant’s previous criminal convictions can lead to a refusal.

The weight given to different types of prison sentence can be summarised as follows:

It is important that the applicant discloses all convictions, no matter how trivial they themselves deem them.

It is not public knowledge what exactly the Home Office will consider regarding this.  The applicant should therefore err on the side of caution and assume that any involvement with such activity will lead to a refusal.

The Home Office may look whether the applicant has experienced any of the following:

Where no fraud has been committed in bankruptcy and liquidation cases, there will be no automatic refusal.  For other circumstances, the Home Office will look at the applicant’s culpability.  Debt should only be a problem where the applicant has deliberately or recklessly accrued it.

The following are some examples of breaches which will likely lead to refusal:

The Home Office will look at any breaches of the immigration rules dating as far back as 10 years prior to the citizenship application.

If the applicant is associated (for example through friendship) with anyone who has engaged in any of the above, this could lead to a refusal.

The Home Office’s own guidance does not encourage decision makers to give weight to positive considerations such as charity work.  However, case law states it is a relevant consideration so the applicant should include any relevant conduct in their supporting letter.

Our immigration specialists are able to advise on an application to become a British Citizen and on any good character issues that may affect the likely outcome.

If you have any queries relating to the good character requirements or obtaining British Citizenship in general, please contact our team on 0191 232 9547.