Learning to speak English is not a new requirement for migrants 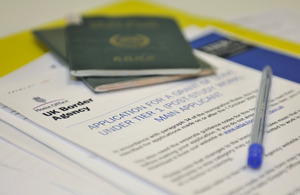 The issue of the need for migrants speaking English has been in the news recently.

The Prime Minister announced funding for English language classes for Muslim women in England, 22% of whom he said speak little or no English. He said this is to help “combat social isolation” and guard against “radicalisation and extremism”.

This is nothing new however for those coming to the UK to settle and to work from outside the EU. There are already legal requirements for them to pass English language qualifications prior to being admitted to the UK, mainly introduced by the Labour government a decade ago.

The level of English proficiency depends on the reason why entry or an extension of stay is being sought.

To come to settle in the UK initially as the spouse of a British national or resident a basic conversational level of English is required. An English test on speaking and listening must be passed before a visa will be granted.

To settle in the UK permanently or to become British all applicants must pass a test to demonstrate a higher level of English language again in speaking and listening plus pass a separate test to show a level of knowledge of life in the UK.

EU nationals and their family members are however exempt from the requirements except if coming to work in specific professions such as doctors and now nurses and midwives.

The general consensus of groups representing communities in the UK is that learning English is a good thing. However it is pointed out that this is an issue not just for Britain’s Muslim population but for all migrants. Muslim groups such as the Muslim Council of Britain also criticise the Prime Minister’s linking of learning English with security concerns and also for singling out Muslim women to highlight this.

The requirement to learn English is no new thing. It is just being broadened.

Bryony Rest is a Partner and Head of Immigration at David Gray Solicitors LLP. If you would like a no obligation chat with Bryony, please call on 0191 243 8151.

Thank you so much for your professional help together with your kindness, support and understanding.