Home › Blog › Proprietary Estoppel ? Elementary my dear Watson: Mr Holmes and his will.

Proprietary Estoppel ? Elementary my dear Watson: Mr Holmes and his will. 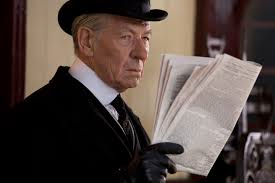 I went to the cinema recently to see “Mr Holmes” – an enjoyable film about the famous Sherlock Holmes. This made me think about some of the legal issues arising from the plot. In the film Holmes, played by Ian McKellen, feels his memories and abilities slipping away as he ages. The film is set in his later life. An aging Holmes lives with his house keeper and her young son. There are flashbacks to his last cases as he struggles to remember the details. As he ages he needs increasing care from his housekeeper who has her eye on another job working in a smart hotel. In the end after a crisis brings everyone together Holmes promises to leave his home to the housekeeper in his will and she agrees to stay and help care for him. Being a lawyer watching the film I thought “What a good example of proprietary estoppel ”.

The concept of estoppel commonly arises in relation to disputed wills and estates. For example, cases may involve a family farm or business where a son or daughter has been promised the farm or business in the future. In return the son works in the business often for little reward. When the parents die the will may not reflect the promise and the aggrieved son goes to court seeking a remedy on the grounds of “estoppel”. The courts will do what they can to remedy the situation and will grant a remedy which may be a transfer of a farm or business to the son.

The facts in Holmes resemble Bradbury v Taylor where a young couple moved to Cornwall to care for an elderly relative for the promise of being left the house and land. When the relative died the will did not leave them the house. They claimed at court against the estate and were successful in a case which was heard by the Court of Appeal.

The legal costs to be paid from such proceedings can be large and the strain on the family relationship can be significant.

In writing wills always think about whether you have made promises to others which should be honoured in your will. In the film Holmes makes a promise to make a will leaving his house to his housekeeper. If he fails to see his friendly local solicitor to make his will the housekeeper would be able to bring a claim against his estate to recover the house for herself. The point is elementary: make sure your will is up to date and take proper advice to avoid family grief and unnecessary legal fees.

I am very happy with the efficiency and professionalism carried out throughout.